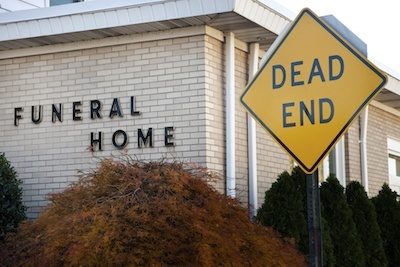 Something happened to me that made me wonder if Undertakers ever laugh and I found out the answer and learned something new. Here is what happened.

I got a message from my office to say that a gentlemen had called and wanted to talk to me about speaking at an event, he left his name and a mobile number. As is the case I always do a quick Google to decide if I will make this call or have my PA call them.

It was one of those rare occurrences where I struck gold, an exact match, the name and mobile number existed on a website. I clicked it.

It was a Funeral home!

My first thought was this is a prank. So to be safe I sent a text message, the reply came back it was genuine so we decided to speak on the phone.

Before the call my head was spinning - surely they don't want an inspirational speaker at a funeral? So, I made the call.

It turned out this person was arranging a conference for Undertakers and was looking for a Motivational Speaker for their annual conference of about 80 Funeral Homes or Undertakers. My head spun, I can't do this I thought, after all my talks involve a lot of humour and I can't see them having a sense of humour.

As he started telling me about the event I resisted the urge to check I wasn't going to be speaking after lunch - otherwise known as the graveyard slot!

Then I was totally taken back in a good way.

He said to me:

"Mark, the thing is this, excuse the pun but in our world we need to start thinking outside the box" !!! - I couldn't believe it and he just kept going with one pun or comment after the other and we had a great laugh.

I told him we should meet before the event to run through the presentation, he said we could meet at their place and he would show me around - "as long as I don't see anything scary" I said. He assured me I wouldn't - In fact he was dead certain about that! (sorry).

I then mentioned I had spoken for a hair salon owners conference and had visited them to get an idea of the industry before the event.

I also told him that they had insisted I sample the full works with one of the team. I quickly pointed out to the Undertaker that when I visit him, under no circumstances do I want to experience the full works!!

We had a great laugh, the puns didn't stop.

But I learned something very important.

No matter how much we don't think we judge others or make assumptions on what they do, where they live, how they look etc, sometimes these automatic assumptions are running and keeping us away from some great things in life. I assumed this would not be a good experience, and now I am so looking forward to it.

He even promised to make sure I was added to the catering list for lunch, because as he said - "We can't have you dying of hunger at an Undertakers conference"