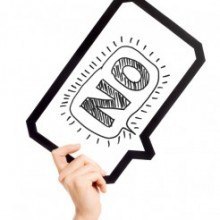 Fear of failure and avoiding disappointment holds many people back.

As far as your goal is concerned, you haven’t failed if you don’t achieve one of the steps first time, or the second time or third time. As Napoleon Hill explains in Think and Grow Rich, it’s an “unplanned outcome”.

Most people think failure is when we don’t get a person to say “yes” that day, or we don’t achieve a particular target immediately, that is when most people say they have failed.

The world doesn’t work like that. The most successful people are successful because they “failed” time and time again but carried on. They found a different approach, and a different way of making it work.

Learn from a 4 year old

My little boy , when he was 4 years old, loved playing with his Nintendo DS, the handheld electronic game. He couldn’t read the sixty-four-page instruction manual that comes with each game. So he played around to sees what worked, and what didn’t work.

If he doesn’t get the outcome he wants because his little character dies or he loses the race, he does less of that. He carries on and takes a different approach. He does more of what works and less of what doesn’t work until he can play the game perfectly, and he can win every time, or at least nearly every time.

He didn’t give up on the first, second or third attempt because he’s too innocent at that age; he’s not been programmed by the media, by school and by parents that if you don’t get the right outcome, you’ve failed.

He has the mindset at that young age that if he hasn’t got the outcome he was looking for it just means he hasn’t figured out the right way yet! As adults, a lot of us will have a couple of goes at playing one of those games and throw it down saying, ‘What a load of rubbish, I’m not wasting my time on that.’ We feel embarrassed because we didn’t get it right first time.

For some reason we expect to be able to do new things right the first time, and if we can’t, then it must mean it’s never meant to be! Somewhere along the line we have forgotten about a learning curve, about adjusting what we do until we get the result we are looking for.

A new way of looking at “failure”
Think about this, let’s say my goal is to get a new job. I’ve had five interviews, and every one of them has said, ‘No.’ This isn’t failure.

My goal is to get a new job and the opportunity or possibility for me to get a new job still exists. So I can’t have failed. I might decide to take some feedback after five ‘No’s’, and ask myself ‘am I applying for the right positions and saying the right things?’, and try a different approach to interviews. But as long as the possibility to achieve my goal on a different day in a different way still exists, then I haven’t failed.

This is the ‘unplanned outcome’ I mentioned earlier by Napoleon Hill. The most successful people get there by doing it, and if they didn’t get the outcome they wanted, they did it again, or they changed their approach until they got it right.

Does fear hold you back?